WHAT’S NEW
at
YOUR VOLUNTEER CENTRE?

Collective Christmas 2016; What Community Is All About

“Delicious food, great music, festive atmosphere!”
“Parfait – une belle journée!”
“We look forward to this every year!”
“An amazing event, this is what community is all about!” 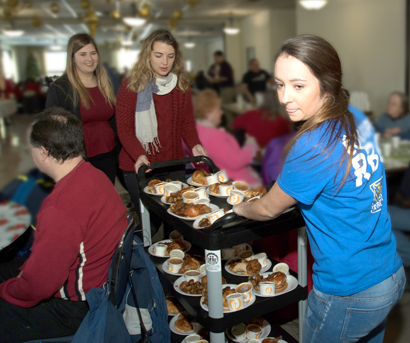 They feel fortunate to have the assistance of RBC employees who have volunteered at this annual event since 2008 when they decided to adopt the Collective Christmas as their special project. Once again, thanks to the presence of the RBC volunteers, community group staff and clients had a rare opportunity to socialize in a relaxed atmosphere. In their own words:

“It’s a privilege to have them”.
“They are priceless, without their presence the event wouldn’t be such a success”.
“They are invaluable, efficient, practical and extremely human”. 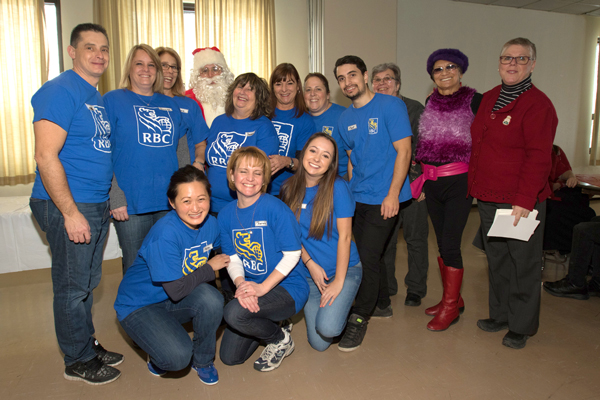 The “Dream Team” from RBC, working together with community group members to make a difference, exemplifies the importance of partnership among corporate and community partners

There were 183 attendees, clients, staff and RBC volunteers. The DJ was Raphael Charky, doubling as Santa Claus, and the emcee was Colleen Mulroney. In addition to conversation and a tasty meal, activities included entertainment, music, dancing, and drawings for a wealth of prizes.

“We are never too busy to help out such an important activity as this one. We all enjoyed devoting our time and had fun doing it. You can count on my colleagues and me to help out again next year. My youngest daughter who is 19 even came to help out and really enjoyed the day. She was very happy to be a part of this activity” – Cheryl Matte RBC Liaison. 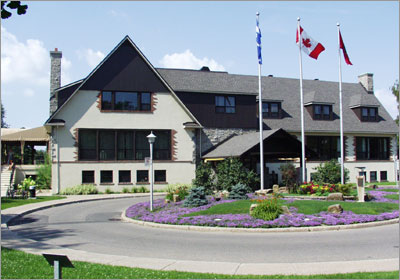 In 2016, notification was given that the Betty Russell Centre where the Dorval MOW service had flourished over the years, would be demolished in 2017.

The MOW Board of Directors and Volunteer West Island discussed and agreed on a plan of action with every hope that efforts would permit the kitchen that has been supplying Dorval MOW clients with hot, well-balanced meals twice weekly for over four decades, to maintain its operations in this municipality. Although several prospective partners were willing to consider housing Meals on Wheels, the group’s first priority was to remain affiliated with the City of Dorval.

The story has a happy “ever-aftering”, thanks to the resourcefulness and generosity of Mayor Rouleau and his Team who were forthcoming and reactive to the need to maintain such a crucial service for Dorval residents. They worked tirelessly with Dorval Meals on Wheels Coordinator Joan Fowell and her team of volunteers and Volunteer West Island to make this happen. 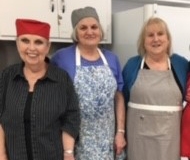 “Mayor Rouleau and the Dorval Leisure and Culture Committee renewed their long-term relationship with us by accommodating the Meals on Wheels service at the Sarto-Desnoyers Community Centre. &nbsp;Joan Fowell, long-time Dorval MOW Kitchen Coordinator, and her team of volunteers have been instrumental throughout this transition, working together with VWI”, Ms. Barrett maintained.

The last hot meal was prepared at the soon-to-be-closed Betty Russell Centre Thursday, January 19th, 2017 which was also the final day to pack equipment for the move, organized by Joan Fowell, Carmela Carrera, volunteers, and Volunteer West Island staff.<strong> &nbsp;</strong>

“It’s important to recognize the dedication of our volunteers and how committed they are to continuing this valuable service.&nbsp; These people are amazing!&nbsp; &nbsp;Under the direction of Joan Fowell, they will continue to serve hot nutritious meals with a side order of warmth and friendliness to seniors in Dorval.&nbsp; We also thank the mayor of Dorval and the municipality for their partnership and cooperation in finding us a new home.&nbsp; Change isn’t always easy but I think it’s a move (pun intended) in the right direction!” – Shelley Hayden, Food Service Coordinator at Volunteer West Island.

As of January 26th, it was back to business as usual with the Dorval kitchen fully operational.

Dorval Meals on Wheels will be celebrating its 45th birthday in its new location!